Phil Rambow is disgusted with Donald Trump, or “this diapered Duce,” as he calls the president in his new song, The Writing’s On The Wall.

Get in line, Phil, get in line.

“We all need to be vigilant and active against the storm of fascism that is on the rise,” Rambow said.

The song is the title track of his recently released EP of the same name on Rambow’s RDJ label. 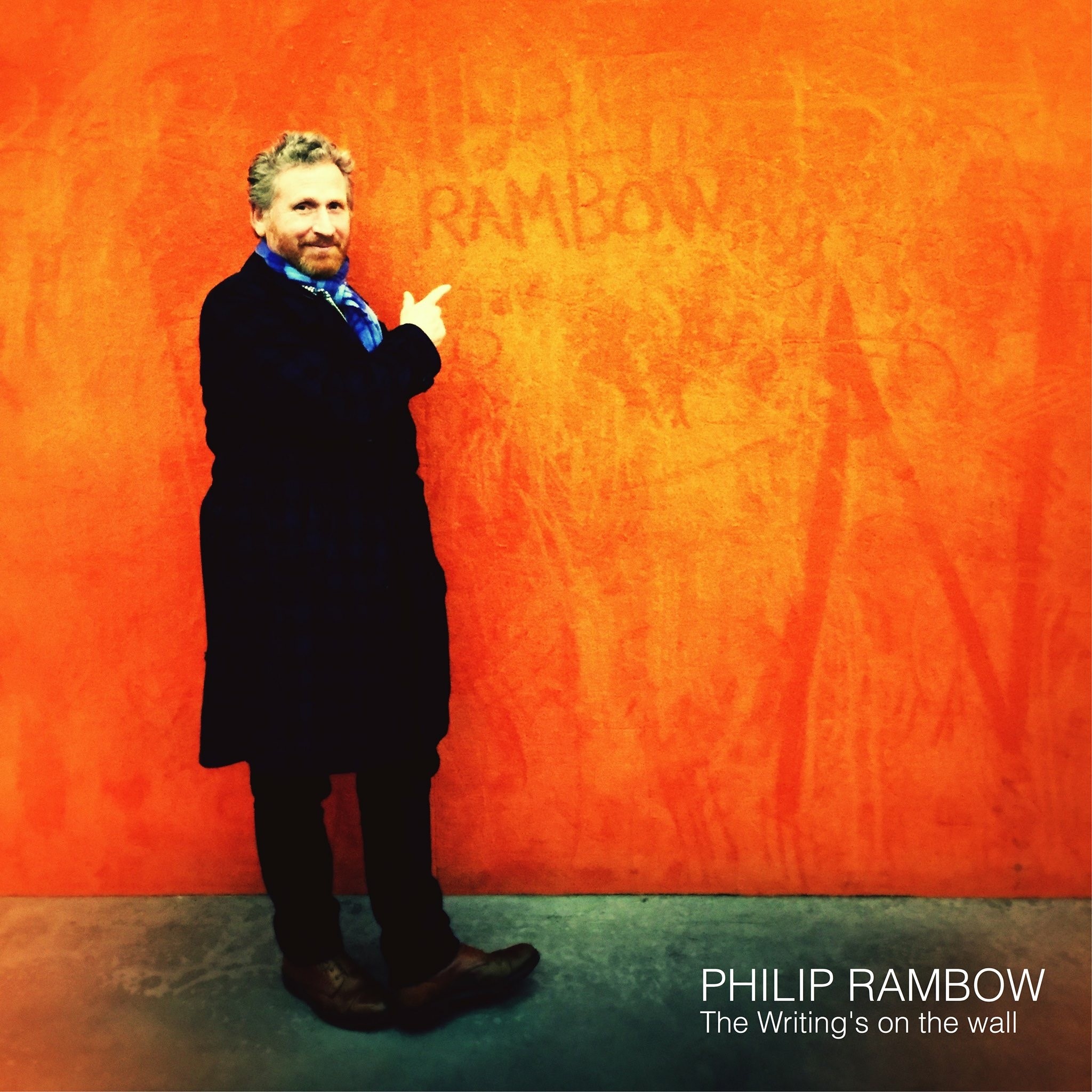 The EP comes as part of a recent career flurry that includes a 2015 release, Whatever Happened to Phil Rambow, named one of the top albums of 2015 by the online edition of Goldmine. Rambow also recently performed four gigs with his reformed band the Tex Pistols, the hottest bar band in London in the late ‘80s and early ‘90s. And more Tex Pistol shows might be on the horizon.

So, whatever happened to Phil Rambow?

The London resident, Montreal native’s first UK band, The Winkies, played influential glam-themed pub rock. “Mick Jones of The Clash and Tony James of Generation X came to a Winkies gig when they attended Hammersmith Art College,” Rambow recalled. “We rocked so hard on that last number part of the stage literally collapsed just behind me. As we walked off there were two distinctive looking audience members, Mick and Tony, standing at a side rail and shouting and raving about us.

“Mick was asked by The Guardian in 1999 for his all-time top 10 albums. The Winkies was number three.”

After The Winkies broke up, Rambow collaborated with Kirsty MacColl, Brian Eno, Mick Ronson, Ellen Foley, and others.

His collaboration with MacColl, There’s a Guy Works Down the Chip Shop Swears He’s Elvis, was a top-twenty hit on the U.K. charts and Rambow signed a three-year songwriting deal with Warner Chappell, for which he wrote a few hits, including Young Lust by Foley that went gold in Holland. After the deal ended, he took a job as head of A&R for the British label Bronze Records and returned to Canada in the early ‘90s, working with Vancouver’s Music West festival.

Back in England he had an assortment of jobs while raising his family.

In 2006 he started performing again with his former Winkies bandmate, guitarist Guy Humphrys.

Subsequently, at the urging of Ronson’s sister Maggi, he was interviewed by Glen Matlock at London’s Institute of Contemporary Art for a show on the late guitarist. That led to offers for more gigs and eventually Rambow’s return to recording.

The Writing’s On The Wall’s other tracks are Alligator, My Father’s Place, and Phil Rambow’s 24,000th Dream.

The swampy sounding Alligator was motivated by a family outing to the Everglades, where alligators are now bred to put on a show / For tourists, to provide a savory treat.

But it’s Trump’s America that’s still on his mind when he sings, What’s our fascination with the world of the American South / That melting pot of conflict, that world of hand to mouth. Is it that corruption, hubris and hypocrisy / Can all be cleansed by rock & roll and jazz / And memories of democracy.

In My Father’s Place, Rambow recalls the security he felt as a child in Montreal, “when we are very small, snuggled and protected, and out of harm’s way.

My father’s place , my father’s house / Where I could be a little mouse / With time and space to grow into a man / And brave the world without a plan.

But politics, once again, is not far from Rambow’s mind—and his antipathy toward its worth elements is not limited to the U.S. About his hometown he sings, The roads are wrecked, the bridges all fall / The stench of corruption is misunderstood / If you’re a part of it, it smells quite good.

Montreal is also the setting for Phil Rambow’s 24,000th Dream, inspired by a haunting 2007 visit to his Aunt Clara in a Montreal senior’s facility. “In the public ward was Irving Layton, unmistakable to me even in his advanced years, in a wheelchair and motionless. It was a shock to see a great man in such reduced circumstances. Leonard Cohen always cited him as his first mentor and inspiration, dedicating his last published book of poems, Book of Longing, to Irving. The whole experience was deeply unsettling and still gives me bad dreams today.”

In the Dylanesque tune, Rambow recounts the memory from a patient’s point of view.

Rambow will be supporting the EP with shows throughout London in the fall. “It’s so rewarding playing new songs and finding a new audience,” Rambow said. “A lot of people who come to the gigs are fans from before. For many, I am a completely new artist.”

The writing may be on the wall, but it will be live and rocking when he performs the new songs.

The Writing’s On The Wall from Philip Rambow on Vimeo.