SWEATING OUT MY GYM TOWELS

There is no way to state this except plainly. “Gatorade Sideline Towels” are a terrible product.

It pains me to say that because I had been on a quest for such a towel for what seemed like forever. So when I discovered them being sold at Dick’s Sporting Goods four years ago I was beyond delighted.

Yes, I’m the kind of guy who goes on a quest for towels.

Growing up, I don’t recall being much of a sweater, you know, someone who drips sweat during sports or in the heat. I’m not like some people who stream like a fountain when it’s hot, but as I’ve got older, as with so many other things that have changed in the way my body functions, now I’m a bit of a sweater.

And because I play in a weekly basketball game, try to run regularly, and periodically begin exercise regimens, I need towels to wipe away the sweat.

At one point I had three or more of what I’ll call pool, or gym, towels, the white towels you get at a pool or a gym. And somewhere, somehow along the way, I was down to one. 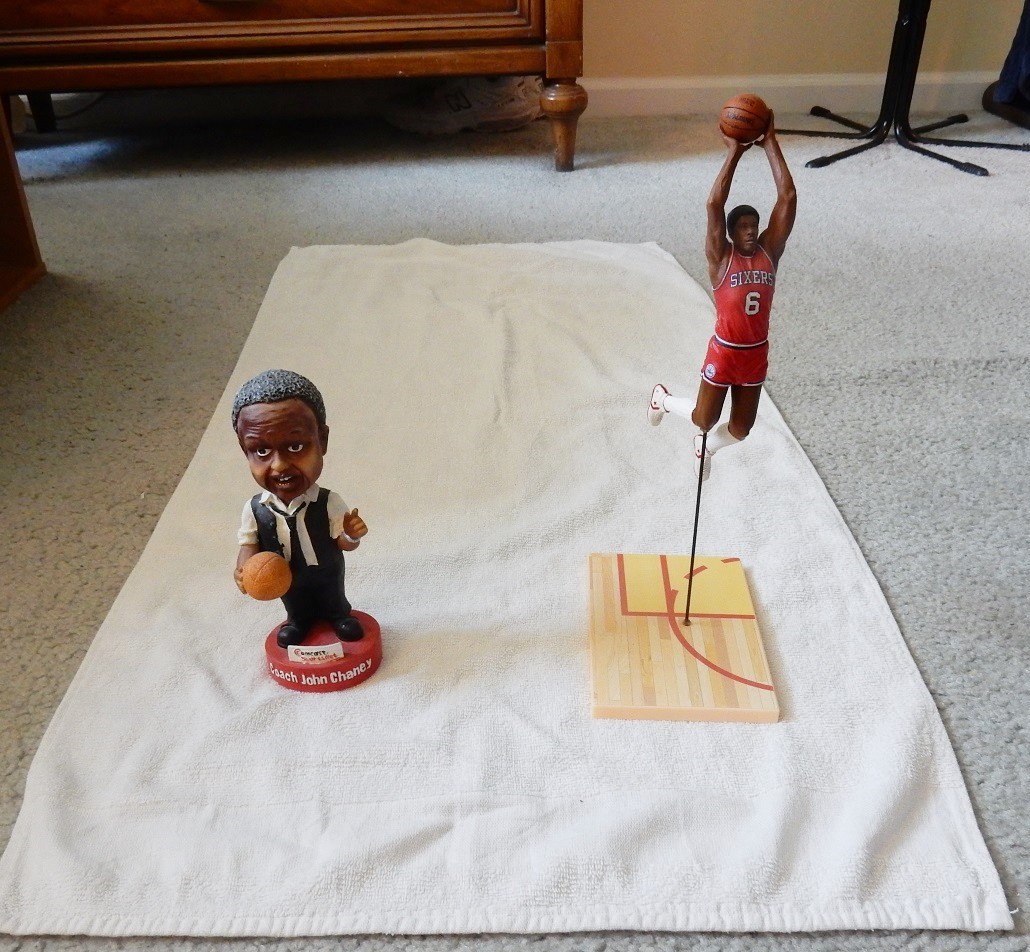 My long-lasting, 20-plus years gym towel, with a John Chaney bobblehead and Dr. J mini-statue added for visual appeal. The towel may be durable but at the end of the day, it’s a plain, boring white towel.

I don’t get how I can lose a towel. And yet I do. And towels aren’t the only things I’ve lost over the years. Perhaps they’re in some metaphysical lost and found department along with all the gloves and mittens I misplaced as a child, an Alejandro Escovedo CD that disappeared, the nail clippers that I can’t find anywhere and the umbrellas I continually lose.

As my need for more towels manifested I went right away to the internet to find some. But I couldn’t buy just one or two. All the internet towel vendors require them to be bought in bulk and I didn’t need 48 towels. Just two or three more. I could see buying, maybe 10, so I’d be covered for the rest of my life. But I’m not going to buy 48 towels. It’s not like I can give the extras away as bar mitzvah presents.

As my towel inventory dwindled, I was getting nervous. Not sweating nervous, I’m not that neurotic.

And then, as I was shopping in Dick’s, I saw the Gatorade towels. Perfect.

I bought one and every so often I would by another so that I would have enough in stock. Eventually I had four Gatorade towels.

I don’t know how or when I acquired my gym / pool towels but I am almost positive that my mom gave them to me 20 years ago. At least. I never bought any, that’s for certain.

So I have one pool towel which is at least 20 years old. It’s a great towel as far as these things go. It’s not plush, it doesn’t have a high thread count. Or maybe it does. I’m not sure what a thread count is. But it more than gets the job done as far as wiping sweat away.

On the other hand, the Gatorade towels are the picture of planned obsolescence.

Recently, two of them developed big chunks fraying away that look like they ripped because I had to  wrestle them from a dog’s jaws. 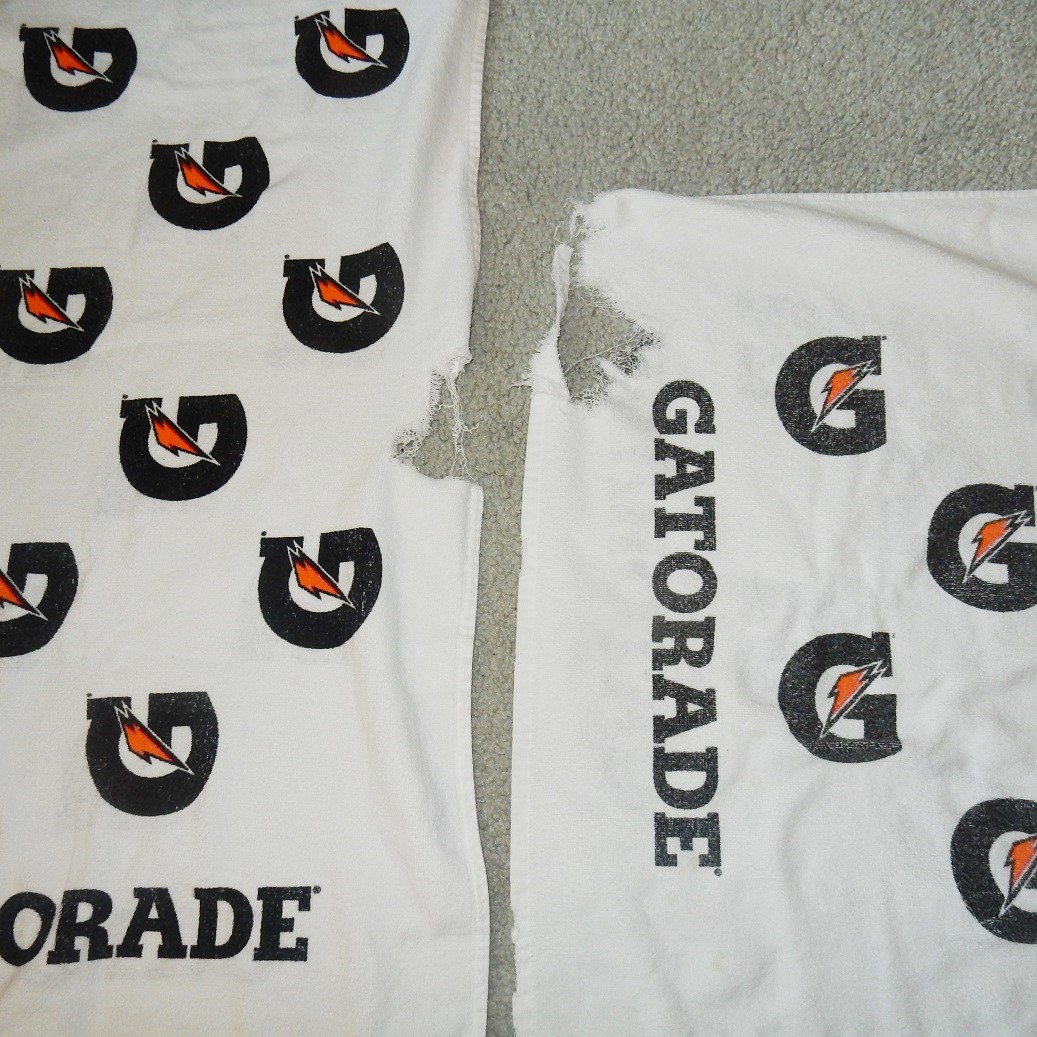 Assuming that the two ragged towels are the oldest ones I have, I couldn’t have used either of them more than 75 times and I’m sure that estimate is high. Seventy-five uses! Seventy-five washes! And I’ve had my pool towel for 20 years and it’s still going strong.

I called Gatorade to complain and ask what the company expects the lifespan of their towels to be.
I spoke with Maureen who said she has no information on how long a towel should last.

Should one last more than four or five years, I asked. Maureen, pleasant throughout, said it would depend on how often it’s used and how often it’s washed.

I was getting nowhere. Maureen offered to have me speak to a supervisor but it wasn’t worth it. I had made my complaint and no doubt it would be dismissed as the ranting of a cranky old man. Or promptly forgotten. Or laughed at in the cafeteria during lunch. No matter how far up the chain it went it was never going to get on the agenda of a board meeting.

Maureen did give me pause when she said a towel’s lifespan depended on the number of times it’s used. I hadn’t thought of that. I just assumed that a towel lasts a good, long time, based on the 20-plus years my one last pool towel has survived.

Some internet research tells me that a good quality towel lasts from five to 10 years.

Are the Gatorade towels good quality?

The Gatorade site says the towel “quickly absorbs what players sweat out, with lightweight cotton construction and dimensions ideal for draping around the neck.”

Maybe they fray so quickly because they are lightweight cotton. And did scientists or towel engineers really study what dimensions make a towel ideal for neck draping?

Even if the towels are designed to last no more than five years, that’s unacceptable. It’s a licensed product, but Gatorade should insist on a more durable, longer-lasting towel if they want to slap their name on it.

I’m hoping I can find a reasonable pool towel source before the towels fray completely away because I’m throwing in the towel on Gatorade towels.