When the Tex Pistols first began performing around London in the early 80s they had two rules: don’t rehearse and always get paid.

It’s been more than 25 years since their last gigs, in 1991, so there will be some rehearsing prior to the reunited band of ace English musicians four shows beginning July 2. 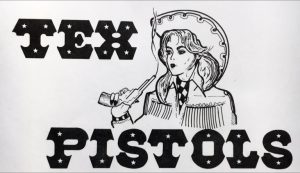 It won’t be hard for the members to get back into the groove. The Tex Pistols will play the same repertoire they always have, first generation American rock n roll, country and western, and rockabilly classics. “Songs by George Jones, Hank Williams, Johnny Horton, Johnny Burnette, Elvis Presley, the stuff we grew up wanting to learn to play,” said Philip Rambow, the group’s rhythm guitarist, one of its vocalists, and the driving force behind the reunion.

Yes, the band members will be paid. And who doesn’t like to get paid? But the reunion shows and limited-edition EP the band is putting out have another, important purpose other than just to rock out. Their intention is to bring attention to prostate cancer.

The original members of the Tex Pistols were all loosely associated with London’s pub rock scene. Rambow was in The Winkies and lead guitarist Martin Belmont was in Ducks Deluxe and later, The Rumour. Bassist and vocalist Paul Riley was in Chilli Willi and the Red Hot Peppers.

They were soon joined by drummer Pete Thomas of Elvis Costello’s Attractions, who had been in Chilli Willi and the Red Hot Peppers with Riley. While other players floated in and out, another mainstay was fiddler Bob Loveday, who is joining them for the reunion gigs, as well as occasional Tex Pistol, vocalist and keyboardist Geraint Watkins.

They were, Rambow said, a pickup band.

“We said let’s get together and do some gigs, some gigs in a pub, gigs wherever, of music that we really love,” Rambow said. “We just wanted to keep our hands in when we all had time on our hands.

“The setlist sort of wrote itself because at the end of the day we’re playing some of the greatest songs ever written. Hard to improve on,” he said.

The Tex Pistols name was suggested by Riley who knew that Tex Pistols was the name of one of the first bands of James Burton, Elvis Presley’s guitarist. It’s also, of course, a play on the Sex Pistols. (There are a couple of bands in the U.S. with the Tex Pistols name, but Rambow is certain they were the first of the current incarnations.)

Soon enough, the gigs gained a reputation for the hottest jam in town and local and touring musicians would come by to sit in, including Paul Carrack, Carlene Carter, Nick Lowe, and Doug Sahm.

The Tex Pistols broke up when Thomas moved to Los Angeles.

“Not to disparage any of the other players, but part of the Tex Pistols sound, and where we came up with the one moniker to describe the Tex Pistols, is punkabilly,” Rambow said. “Because that kind of was the way we sounded then and a lot of that has to do with Pete Thomas’ push, the way he whacks out the drums. We’re not a rockabilly band because we don’t just do rockabilly music. We do some rockabilly stuff, we do Cajun, we do country and western, we do first generation rock n roll,” Rambow said.

“When Pete moved to L.A. we said, ‘well, we can’t really be the Tex Pistols without the original members.’”

In conjunction with the reunion gigs, the band went into the vaults and dug out four tracks they had recorded during their first go-round. They are the standards Hank Williams’ Cold Cold Heart and Train Kept A-Rollin’, along with Louisiana Blues by Joe-El Sonnier, and a live version of I’m Coming Home by Tillman Franks and Johnny Horton.

The EP opens with a newly recorded version of the Kirsty MacColl classic There’s a Guy at The Chip Shop Swears He’s Elvis, which Rambow co-wrote with MacColl.

The newly recorded Chip Shop, recorded digitally at each member’s home and then mixed by Rambow, was done Cajun style by the Tex Pistols, with British musician Sarah Jane Morris contributing background vocals.

The idea was to do an original version of a song that everybody’s heard, Rambow said. “There’s never really been a decent cover version of the song. It’s a great record and you can’t really replicate it and make it successful. So we had a unique sort of sound and idea and said let’s do Cajun.”

All profits from the EP will go to Prostate Cancer UK.

“We’re a live band and if you come to see us play then you can relive the experience of seeing the great artists that we saw when we were kids,” Rambow said. “Live music’s the best.”

Click here for band member biographies and to purchase the Tex Pistols EP.