THE SEARCH FOR SEARCHERS MUSIC IS OVER

The Liverpool band were rivals to the pre-stardom Beatles. They had a string of hits between 1963 and 1965, including the classics “Needles And Pins,” and “Love Potion No. 9” among others, and were outrageously influential.

“Of all the Liverpool bands, The Searchers were my favorite, apart from the Beatles who were in a different league than everyone else,” said Martin Belmont, the British musician best known as the guitarist for The Rumour. “The Searchers picked great songs, had great vocal harmonies, and a jangly guitar sound that was different at that time.”

“I thought they were a bit sugary at first, but ‘Needles And Pins’ nailed it,” said British writer, lyricist, and drummer Will Birch. “Then “When You Walk In The Room” heralded the new sound, as picked up the following year by The Beatles’ ‘Ticket To Ride’ and almost everything by the Byrds. Their songs were, of course, cover versions and The Searchers didn’t have any real in-house songwriting skills, but that didn’t matter because their vocals were so good, and they stuck their necks out with folk songs, and a really quite diverse repertoire. I think they invented ‘folk-rock’, at least on this side of the Atlantic.”

Because the band members were unable to write their own material they got left behind in the mighty wake of the British Invasion bands. Their recordings failed to chart but the band continued on as a live act, performing lucratively on Britain’s cabaret circuit throughout the ‘70s.

Gone from the charts, but not forgotten by their fans.

“That situation changed at the end of the decade, when Sire Records, the forward-thinking home of such punk/new-wave acts as the Ramones, Talking Heads, and Dead Boys, expressed interest in funding and releasing a new Searchers project. Apparently Sire founder Seymour Stein was a fan of the band’s vintage work, and was dismayed to learn that they were no longer recording,” Scott Schinder writes in the liner notes of the new two-CD set, Omnivore Recordings’ The Searchers’s Another Night: The Sire Recordings, which compiles the band’s 1979-81 recordings. 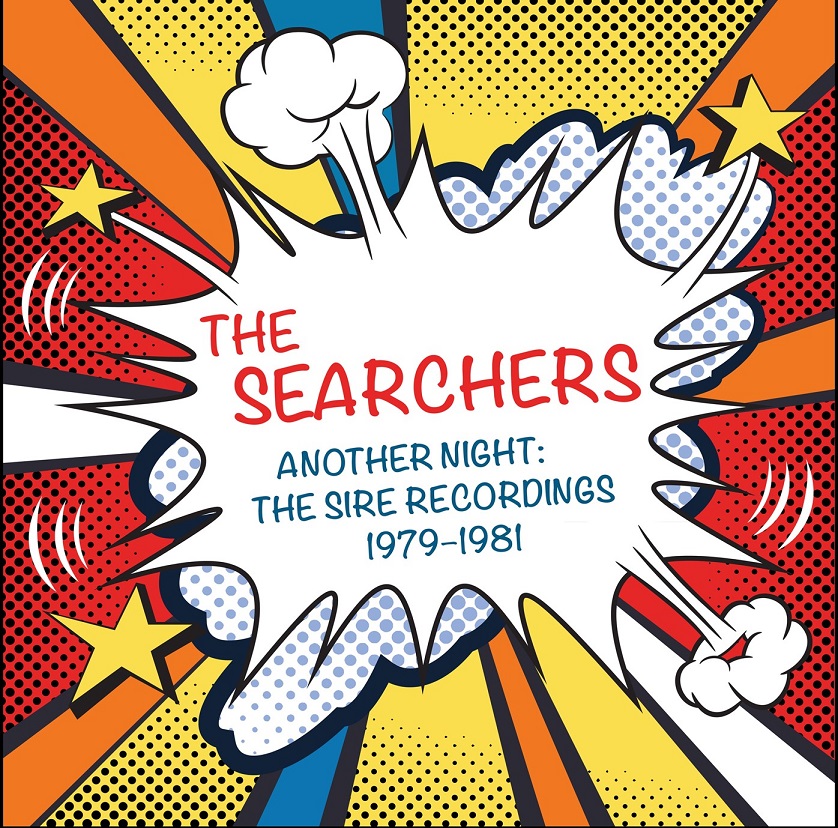 “We were being mentioned by artists like Tom Petty and Bruce Springsteen,” says guitarist and founding member John McNally in the liner notes. “This created interest from Seymour, who asked what we were up to. When he was told we were still on the road, he came to check us out and after the show he came into the dressing room and signed us.”

According to Schinder, with a new generation of bands playing catchy, concise, guitar based pop-rock, The Searchers’ original sound was back in fashion. The band could make music that sounded current without substantially altering their musical approach.

In the liner notes, Searchers bassist Frank Allen said emotion was the main consideration in choosing material for the albums. “We entered the project with no hard and fast rules, except that our choices would be emotional more than commercial.”

The two records were filled with outstanding pop-rock songs, some by The Searchers and others by Bob Dylan, John Fogerty, and Tom Petty, among others. The first disc, 1979’s The Searchers, included a song, “Hearts In Her Eyes,” co-written by Birch for his band, The Records. The recording, he said, was a dream come true.

Birch contributed two songs for the next album, Love’s Melodies (known as Play For Today in the U.K.) “They sat well alongside songs by John Hiatt, Ducks Deluxe, and others,” Birch said.

The emotion was there. The sales weren’t.

The Searchers returned to performing on the cabaret circuit. Act two of their recorded legacy would have been forgotten if not for an “a-ha” moment of discovery by the re-issue specialists at Omnivore.

When the label learned the discs were available for licensing, “we just all went, ‘oh, yeah, I love those records,’” said Omnivore co-founder Greg Allen “I hadn’t even thought about them in a while, that they were out of print or anything. At that point we looked into it to see what’s there. There had been another compilation that grouped the two albums together in Australia some time back. But it wasn’t complete. It didn’t cover the whole story. For us, it was about, let’s do this and get everything in there that they did for Sire.”

It was an easy call for him. He has both records and the singles that were released from them in his vinyl collection.

The CDs contains 29 tracks from all versions of the Sire albums including B-sides and alternative mixes, plus one previously unissued track.

“I’m a huge fan, but I lament their inability to cross over from the Euro cabaret circuit to become something more,” Birch said.

In the liner notes The Searchers’ Allen says the records “certainly proved what we were capable of, and the press was fantastic. We got rave reviews, but the DJs would not touch us with a bargepole. As far as we personally are concerned, they are a very important part of our body of work, and they almost brought us back to the forefront. But in the end, almost every artiste becomes a nostalgia act, and there is no shame in that.”

The Searchers’s Another Night: The Sire Recordings can be purchased at Omnivore Recordings.