GETTING CLOSER TO BEING SLAYED BY SLADE

I never got into the British band Slade.

I don’t recall ever hearing any of Slade’s songs when I was a teen in the mid-70s and would buy almost anything that sounded good on the radio and would also shell out for almost any album if a band I read about in Creem or Rolling Stone sounded interesting.

I was aware of the band. My friend Mike had a couple of Slade 8-tracks and he still considers them one of his top-10 bands.

They were glam, which wasn’t a primary musical interest of mine. And they dressed outrageously, with silly hats, platform boots, and spandex and suspenders. The look was a turnoff (to my oh-so-refined high school taste) when anything more than jeans and a flannel shirt was dressing up. 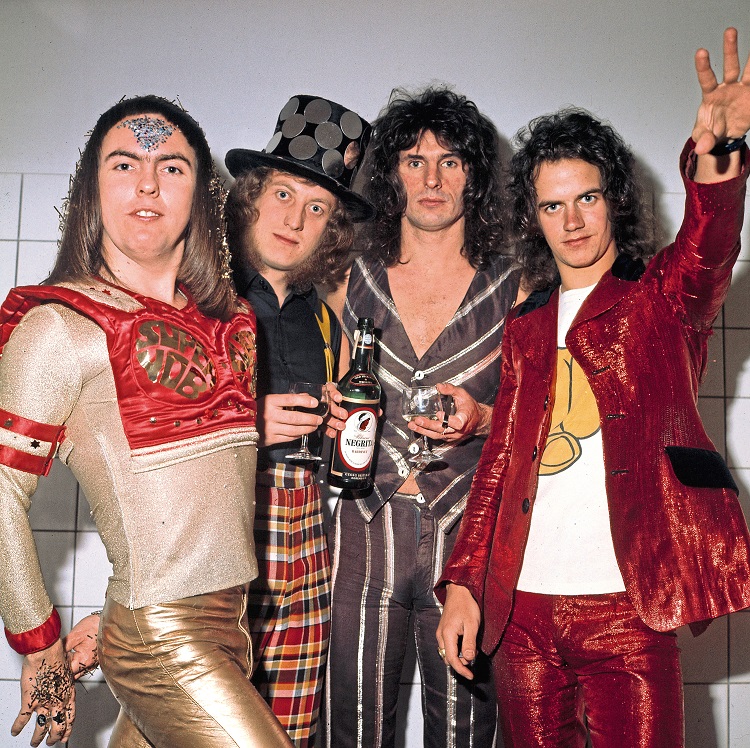 Stolen from the internet.

My interest in Slade was no less piqued later on when Quiet Riot covered both songs. (As a point of information, the name of Quiet Riot’s current lead singer is Jizzy Pearl.)

In other words, Slade, as I imagine the British say so promiscuously, was not my cup of tea.

I wasn’t alone in my lack of interest in Slade. Despite touring the States with the J Geils Band, Black Sabbath, Santana, ZZ Top, and Aerosmith, they never made much of an impact in the America.

In England it was a very different story.

Slade had 17 consecutive top 20 hits and six number ones on the U.K. Singles Chart. And they were the first act to have three singles enter the charts at number one. Their best-selling single, “Merry Xmas Everybody,” has sold more than one million copies and is a much beloved British Christmas-time staple. In total, the band has sold more than 50 million records worldwide.

And they were a huge influence on plenty of great bands, including The Clash, the Ramones, the Sex Pistols, Cheap Trick, The Undertones, and The Replacements.

In Slade guitarist Dave Hill’s autobiography, Noel Gallagher said, “No Slade = No Oasis. It’s as devastating and as simple as that.”

Slade’s drummer, Don Powell, said the band opened for Kiss on one of their early tours and Gene Simmons told him they decided to release Kiss Alive because of the success of Slade Alive.

“The thing with Slade, unlike many of the other bands, is that they were such strong characters in their own right, and like the Beatles, everyone knew all their names and you couldn’t have one without the others. Even though Nod and Dave were the figureheads, the others were just as important,” said British musician Les Glover.  “They were fun and uplifting at a time when the U.K. was suffering from three-day working weeks and power cuts and hard times. Slade and Sweet and Wizzard were the ones who always made you smile and lifted your spirits.”

But I never gave Slade a second thought until a few years ago when I heard their song “How Does It Feel?,” a terrific ballad on a Mojo magazine compilation disc. It did prompt some interest in the band but not enough to actually motivate me to check out their music. I still haven’t checked them out, but I don’t feel badly about it. One of my tenets about music is, you just can’t listen to it all. Some bands and musicians you are just never going to get around to.

So, so much for Slade.

Bear with me. Things are going to get a bit convoluted here.

A few years back I discovered a musician I now consider one of my favorites, Henry Priestman. One of the reasons I like him is that he writes about topics that are relevant to my life now, like aging, aging gracefully, chasing dreams, the fleetingness of youth, and fighting the good fight. He sings with sincerity and his songs have humor. (I’ve now come around on that.) Priestman has a pal he performs and records with, the aforementioned Les Glover, who covers similar musical terrain. I like Glover’s music a lot, as well.

Following Glover on Facebook, I learned that he was involved in what appeared to be a Slade tribute album of sorts. That was one less album I was going to have to buy.

And yet, the song he mentioned, “I Won’t Be Playing Wonderwall Tonight,” sounded intriguing, like a British cousin to John Eddie’s song, “Play Some Skynryd”:

When they say
Play some Skynyrd, play some Petty, play some Seger, play some Dead
Who the hell is John Eddie
That’s what the redneck said.

And then there’s “I Won’t Be Playing Wonderwall Tonight.”

Hey, you may be mad for it
Dancing like your dad for it
You can shout as much as you like
But I won’t be playing Wonderwall tonight

I decided to be open minded for a change and see what the album was about.

The album, Taping the Hiss, is by Glover and Paul Cookson, and Slade’s original drummer, Don Powell. They call themselves Don Powell’s Occasional Flames. 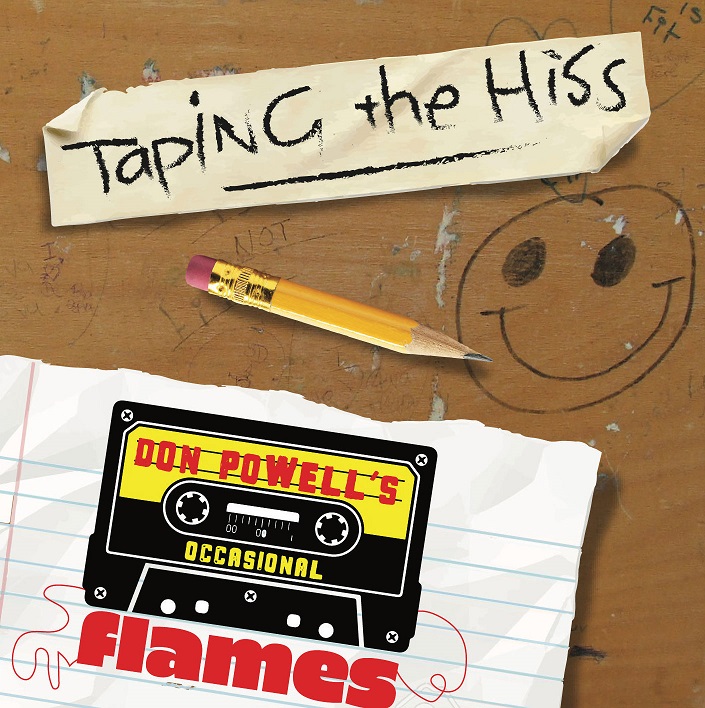 Not only is Cookson a huge Slade fan, he’s a poet and the poet in residence for England’s National Football Museum. Which I guess is even more impressive if you like soccer. He’s also written and edited more than 60 books which have sold more than a million copies. One of his book of poems is about Slade, Touched By The Band of Nod.

A few years Cookson invited Powell, who lives in Denmark, to an event where he interviewed the drummer, who told Slade stories. Glover sang a few Slade songs, plus one he and Cookson had written, “Rose Tinted Glasses.”

Glover and Cookson wrote some additional songs for another event with Powell and Powell was so taken with the song and the general enthusiasm all around that he agreed to drum on the songs.

That’s the short version of how Taping the Hiss came about.

Frankly, Taping the Hiss has a lot of elements that I don’t generally enjoy on records: studio chatter, spoken word pieces, and songs about Slade. But the album is a delight.

It’s the kind of album I would make about one of my favorite musicians, say, Bruce Springsteen, if I were friendly with Max Weinberg, could play guitar, and was the poet in residence of the Baseball Hall of Fame.

Sure, it’s a tribute album to Slade and especially its lead singer Noddy Holder. But it’s more than that. It’s also a reflection about those long ago days of falling in love with music and favorite bands. The music has great melodies, singalong choruses, and satisfying crunchy guitar.  Plus, the album is a hell of a lot of fun.

Once I was Aladdin Sane
Now I need a zimmer frame
Once I danced and did the strand
Now I need a stick to stand
Bingo every Tuesday, Wednesday bang the gong
For the care home weekly Wednesday glam rock singalong

Hoping that the deejay – always a deejay back then
Wouldn’t mutter inanities and banalities
Over the intro and outro, trying to be funny

That speaks to my soul. That was me. And still is me in spirit. 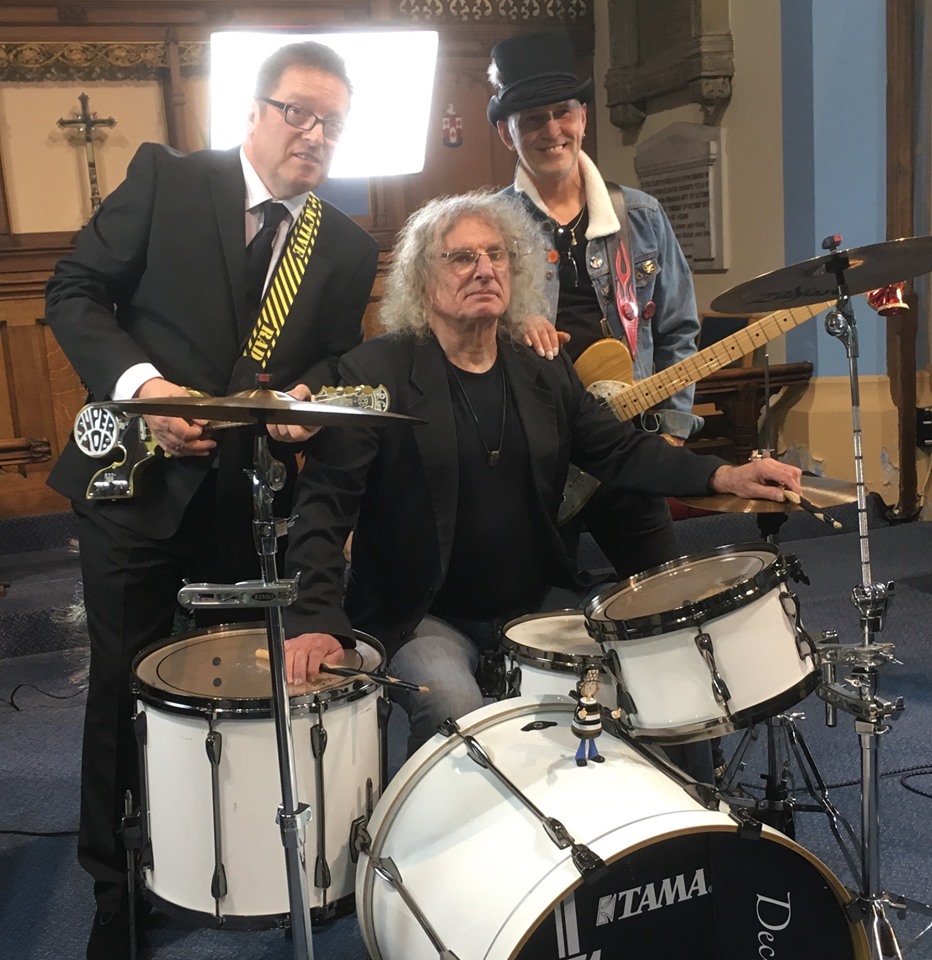 “I love the homage to Slade songs, and the new stuff we’ve written that aren’t Sade related are great, too, with a really ’70s vibe,” Powell said.

“It’s a real buzz playing with Don and he’s such an easy going person and great fun, too. The amount of times I watched Don on TV and now I get to play with him and we’ve become friends and a creative force. That is just mind-blowing,” Glover said. “Slade, Sweet, T.Rex, and David Bowie were my world and came along at just the right time, 1972 for me. It was was a very difficult time for me emotionally as I was going through an adoption and changing families, and so the music was my escape.”

As for me, I’m curious, but I don’t know if I’ll ever listen to any Slade. But I sure as hell will be listening to Taping The Hiss.