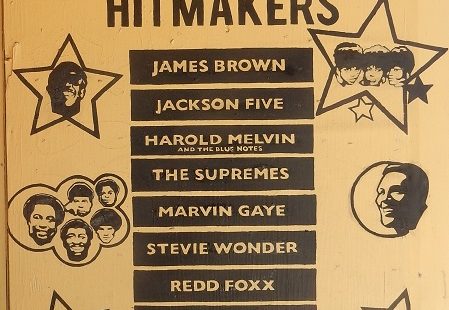 The Uptown Theatre was opened February 16, 1929 as a spectacular Art Deco style movie palace for the Stanley Theatres/Warner Bros. chain. Its opening movie was the Warner Bros. talkie “On Trial” starring Pauline Frederick. The Kimball theatre organ was played by organist Jos. K. Glasner. Throughout its life it catered to a mainly African-American audience.

Live R&B shows were staged at the Uptown Theatre from 1958 to 1972, and among the performers appearing on stage were Smokey Robinson and the Miracles, James Brown, Stevie Wonder, The Intruders, the Delfonics, the Mad Lads, Jerry Butler, Billy Stewart, Pattie LaBelle & the Bluebells, The Manhattans, Earth, Wind & Fire, the O’Jays, The Jackson Five, The Stylistics, Dee Dee Sharp, Chubby Checker, Martha & the Vandellas and The Temptations. It was last used as a church but they vacated the building in 2003.

The Uptown Theatre was added to the Register of Historic Places in 1982. Renovation and restoration is planned, and a reopening to public use is envisaged in the near future. — from cinematreasures.org/theaters/1807