It was a fluke that the British new wave band Yachts developed their signature “garage-y pop sound,” as described by head Yachtsman Henry Priestman. And it was just by chance that the band got signed in the first place.

Yachts’ sound was influenced and inspired by the 1972 album, Nuggets: Original Artyfacts from the First Psychedelic Era 1965–1968, a compilation of obscure American psychedelic and garage rock singles. “There was something magical about them,” Priestman said. “And a lot of those songs had cheesy organ on them.”

“We had the organ because someone was selling it,” Priestman said. “But if I hadn’t bought it, it might be a little different because that was such a signature sound that not many other people had. Elvis Costello’s band had a Vox Continental. That was a sort of a similar one, but we were definitely going a bit retro with it in the way we used it. What would have happened if I had not had a Farfisa organ presented to me to buy? If I had picked up a Fender Rhodes we might have got into, I don’t know, jazz rock.”

The band’s signing to Stiff Records came about after Yachts supported Costello at Eric’s, which had become the club in Liverpool, the band’s home turf. Record company representatives came to Eric’s to see Costello and invited Yachts to support him during a residency in London.

“What would have happened if we hadn’t been asked to support Elvis Costello when he played at Eric’s? By the time we came out of the last week of the month’s residency, it was a case of Stiff Records saying, ‘Okay. Right. We’re signing you.’ And you just think that’s such a lucky thing to happen. The stars aligned and we got ourselves a deal, albeit just a singles deal. But without ‘Suffice To Say’ coming out on Stiff we probably wouldn’t have done anything,” Priestman said.

That single, the New Wave cult classic “Suffice To Say,” along with everything the band recorded has been released on a 43-track, three CD box set. It includes the two albums the band released, Yachts and Without Radar, plus a disc of non-LP singles, B-sides and compilation cuts. Most of the tracks are appearing on CD for the first time. The set also includes a healthy dose of memorabilia that was unearthed from a trunk of Priestman’s. (He’s a bit of hoarder and kept a diary for much of his life.) 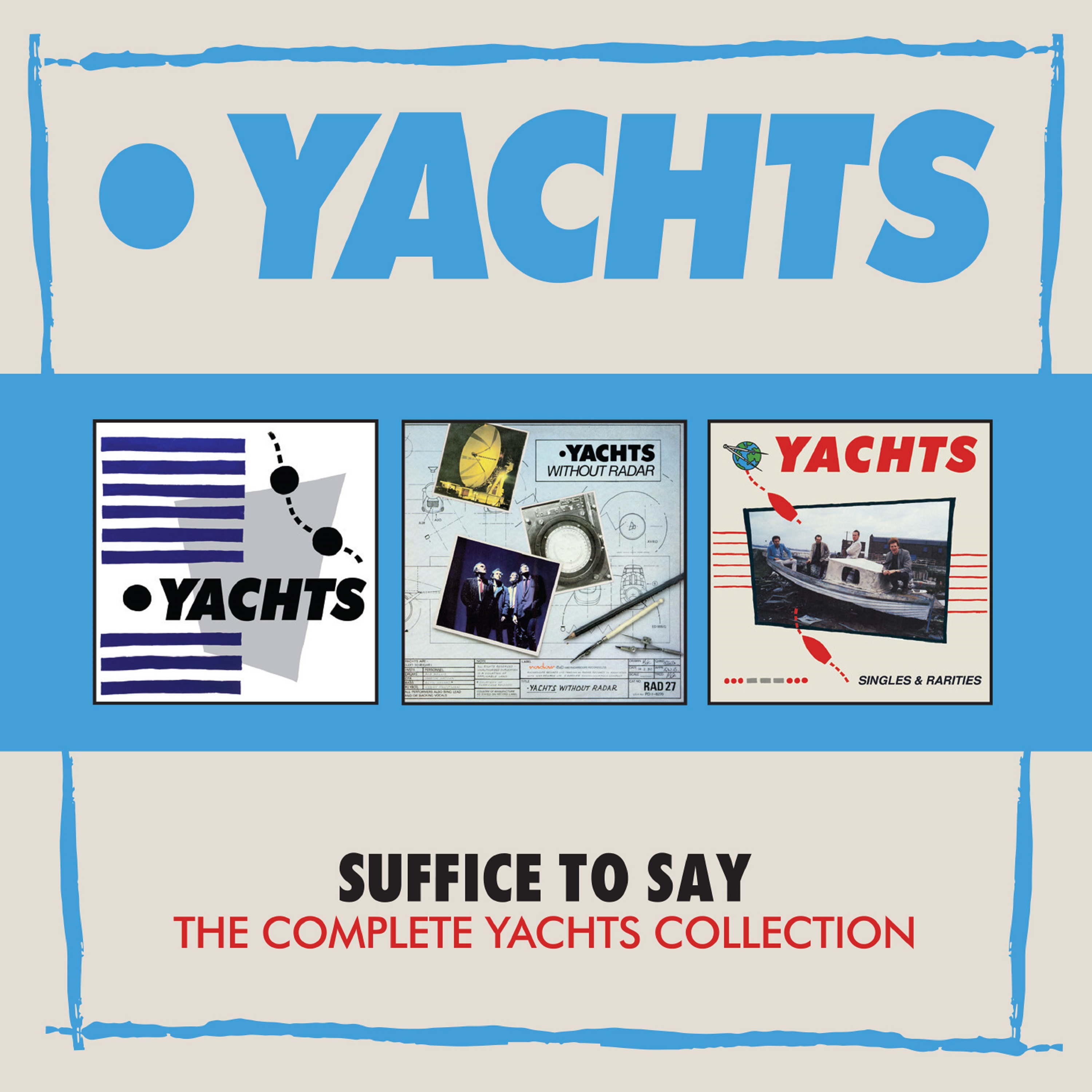 Priestman grew up in Hull, on the East Coast of England. Like seemingly all would-be musicians in England, he had his sights set on going to art school, in 1975, with the intention of starting a band. In Priestman’s case, it was Liverpool Art College, incidentally the same school John Lennon attended.

In DIY fashion, Priestman and his friends, some of whom had never played instruments before, formed Albert Dock and the Cod Warriors (later abbreviated to Albert Dock because the entire name wouldn’t fit on the bass drum). Priestman, who played guitar, became the group’s keyboardist. It wasn’t, Priestman said, “something coming out of the whole prog thing when you felt you had to be an amazing virtuoso. It was, ‘hang on, let’s play ‘Louie Louie’ and see what it sounds like.’”

The band opened for the Sex Pistols at Eric’s. “It was packed out with all these future bands, Pete Burns of Dead or Alive, Holly and Paul from Frankie Goes to Hollywood, Echo & the Bunnymen. All the bands would have been there because we were all getting into this new thing, punk rock. Right, let’s see what it’s about. They were all coming up north. We didn’t have to go down south to see them.” 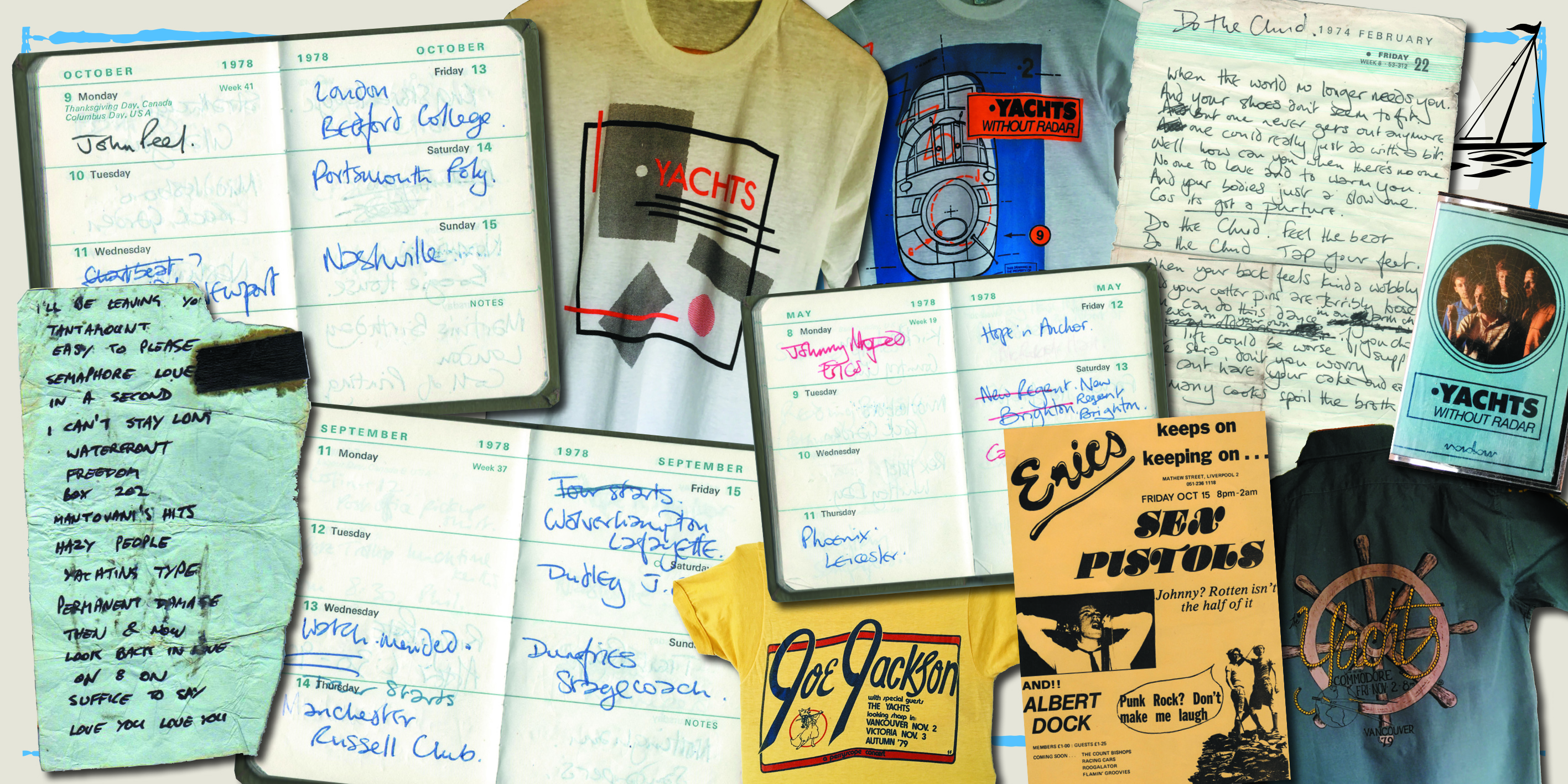 Collage by Chase The Ace Design

The seven-piece Albert Dock would sometimes place a large cupboard on stage with the back knocked out and enter through that to begin their performance. Another time they descended onto the stage by a rope they had place on the side of the building. Hey, they were art students.

“We didn’t write our own songs, but we were crafty enough to pick songs that people thought we might have written, very obscure American psych, or the odd soul song. But when we played it, it never sounded soul-y, more like a joyful racket. It didn’t sound like it at all. So sometimes people thought, ‘wow, is that your song?’”

Punk and new wave began surging in popularity and in the music press, and the band members thought they should take things more seriously. But not too seriously, at least when it came to picking a new band name.

“It was trying to be different,” Priestman said. “Everybody was The Jam and The Clash and the this and the that. Let’s go the other way. Let’s not have a ‘the.’ It was a deliberate ploy not to call ourselves The Lurkers, The Zones. Let’s call ourselves just Yachts.” 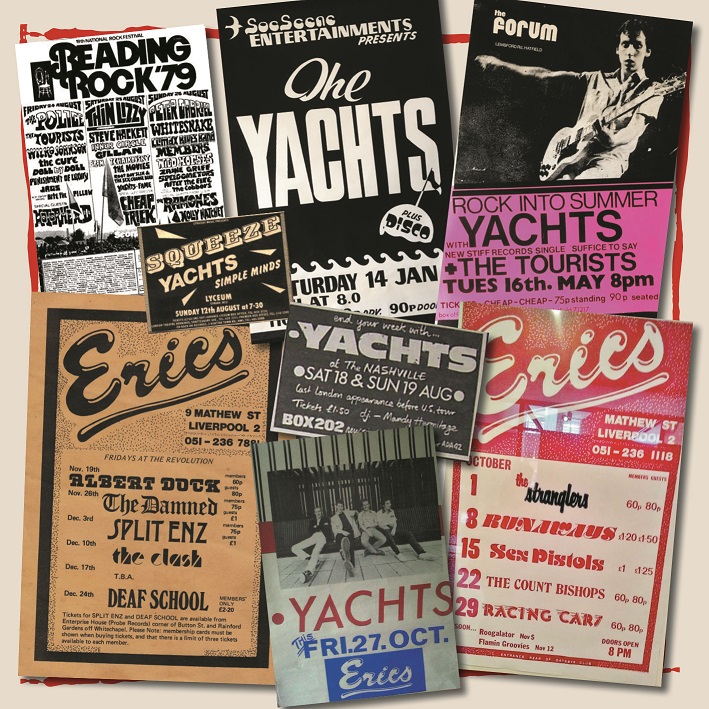 Collage by Chase The Ace Design

The band maintained a clever, recognizable graphic design identity and and wrote often-witty songs like “Mantovani’s Hits,” which imagines a musical universe where Mantovani had hits, but not Elvis Presley.

“Suffice to Say,” which brought them their record deal, was written by Priestman for a girl, Jackie, he was dating.

“For ’Suffice to Say’  I nicked a few chords from a Frank Zappa tune and there’s a few lyrics that I just thought, ‘Well, let’s not be writing typically about girls and cars. Let’s do a song about a song.’

“Another song contained the hook line, ‘She ran away with a yachting type.’ The tongue’s firmly in cheek there, but some people seemed to like it.”

Yachts were signed to Radar Records and spent two weeks recording their debut album in the studio above Radio City Music Hall with Blondie producer Richard Gottehrer, who was a co-writer and producer of “My Boyfriend’s Back,” and co-produced “Hang On Sloopy” among other hits. The album, called Yachts, in the U.K. and, S.O.S., in the U.S., was at one point the number one “added on” album in both Record World and Cashbox’s “Most Added LP” radio play charts, and third on Billboard’s.

Rock photographer Bob Gruen did a photo session at various sites in New York of the band for the record sleeve. They did a 40-date tour in the United States and Canada as headliners, and then a few more shows opening for Costello and Joe Jackson.

Yachts were a band on the verge. Until they came home.

“We came back to the U.K and it felt like more of a drudge, a bit more like hard work. We came from having wowed them in the states and then it was back to real life. The British press didn’t really get us, or the wry off-beat lyrics that people in the U.S. had responded so well to, and we weren’t The Clash, or the Ruts, or Wire, or the Gang of Four. We weren’t angular and angry.

“It was only a brief moment where we thought, ‘here we go.’”

Still, after Yachts’ management sent a cassette of their songs to the Who, Pete Townshend chose the band as openers for a short European tour. 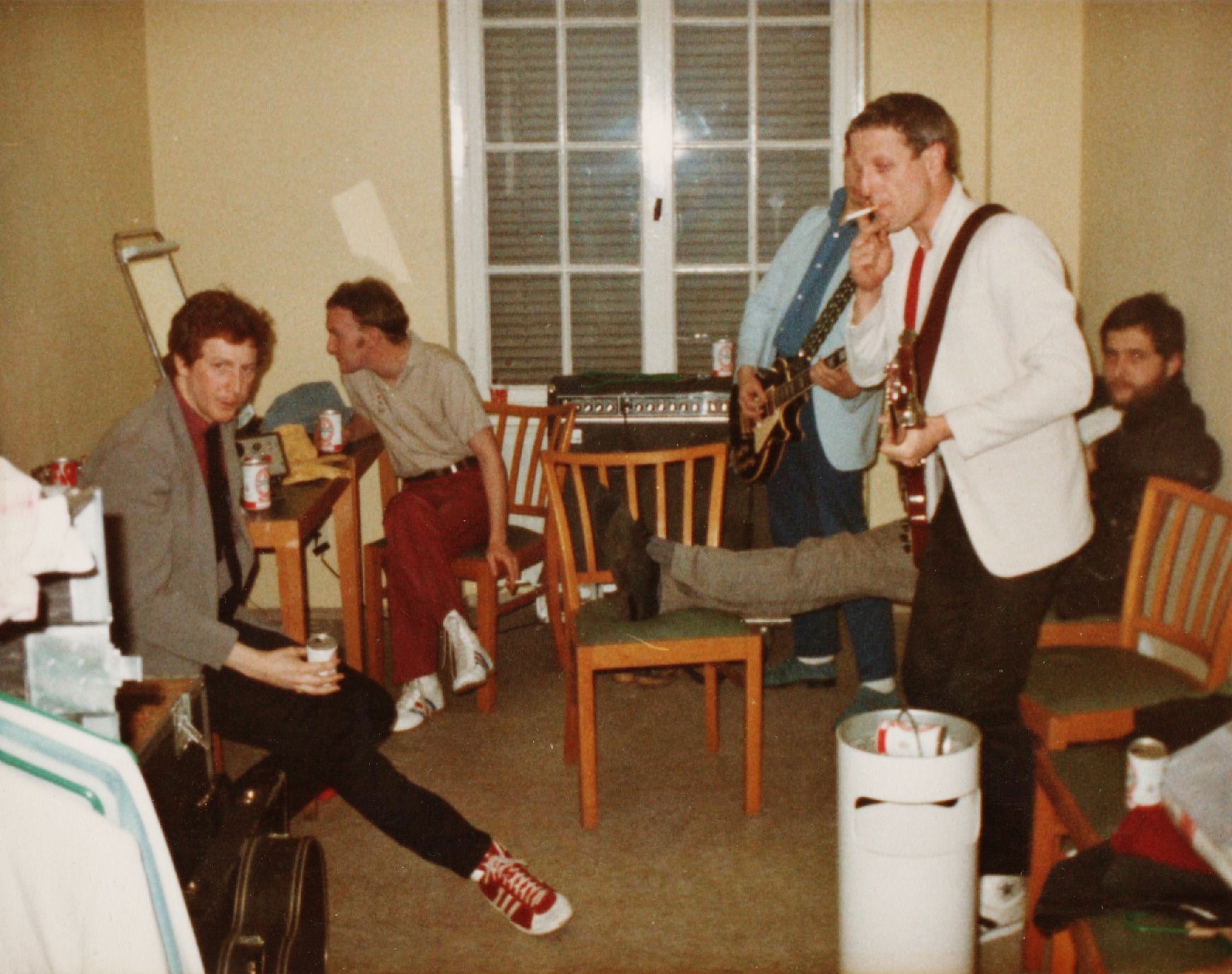 Yachts in Frankfurt, Germany in 1980 while supporting the Who. Priestman is far left.

Their second album, Yachts Without Radar, was produced by Martin Rushent, who also produced the Stranglers, Buzzcocks, and Human League, among others. Priestman called it a perhaps slightly more sophisticated, less poppy, effort, and jokingly added how it has been referred to as Yachts’ “prog album.” That’s because it was written while they were promoting their first album, and the songs were stretched out live and, subsequently, on the album, too. 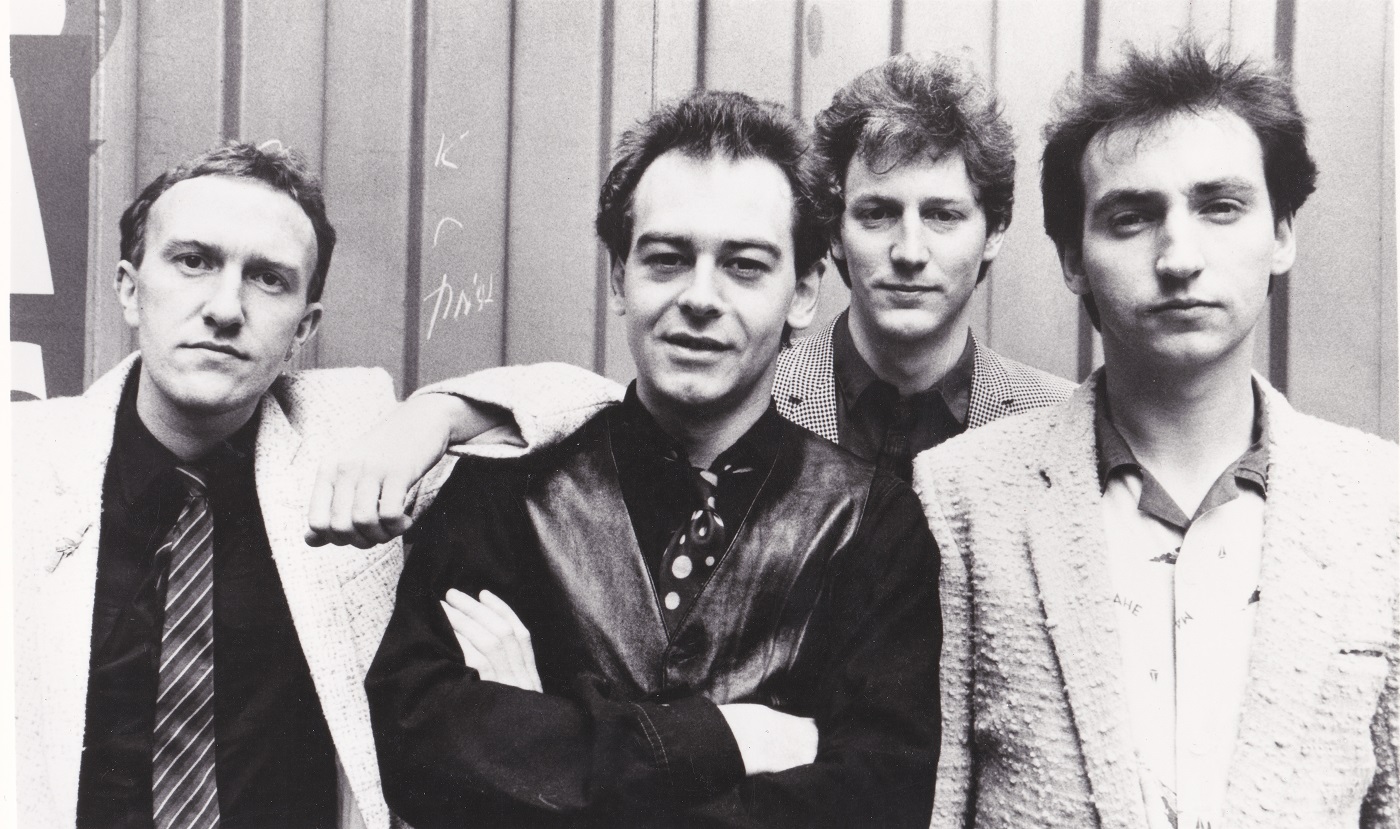 But the album didn’t sell and Yachts was dropped from their label. The band recorded an album’s worth of demos but found no takers. And so, the Yachts enterprise capsized.

The label Cherry Red contacted Priestman about a Yachts box set while he was mulling a way to get the band’s music out. Fluke or fate?

“I’m so thrilled that we collected it all together and it’s getting four-star reviews and we never used to get those back in the day. So it’s great,” Priestman said. “People are coming out of the woodwork saying they like it.”

The box set of Yachts’ music is just one of Priestman’s legacies from that era. The second is his now 42-years-marriage to Jackie, the girlfriend from long-ago who inspired him to write “Suffice To Say.”

You can purchase the box set from Henry Priestman’s website and he’ll also sign it for you.

Spectrum Culture has a review of Yachts’ box set.