Jim Bouton’s Ball Four was published in 1970 when I was 11 and sports were my entire world. 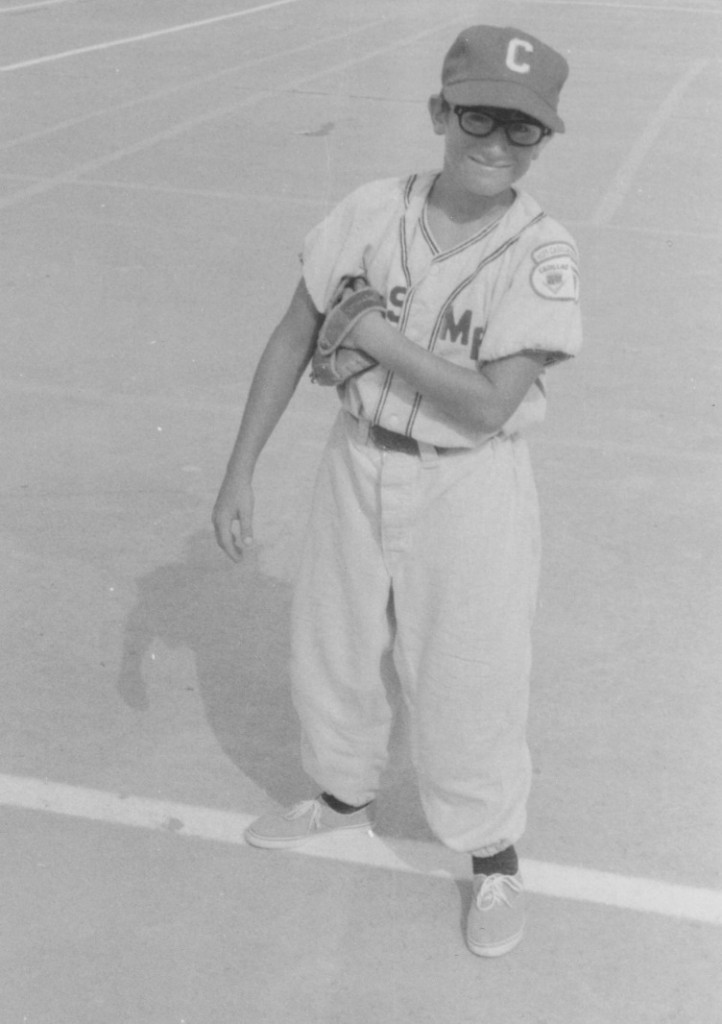 Sports were my entire world when I was 11.

I must have read Ball Four after it had been out a few years because I was interested in girls when I did and there were some sexual shenanigans in the book that intrigued me. I wasn’t sure of everything that was going on, but I was titillated. One of the ball players who appeared in Ball Four was Jim Gosger, who during one of the book’s sexual escapades, delivered the infamous line, “Yeah, surrre.”

Because of his appearance in Ball Four, when Gosger played with the Tidewater Tides, then the Triple A farm club for the Mets, I was starstruck. Here was a ball player who had played in the major leagues. A real-life major leaguer. I suppose that’s why he stuck in my mind as indelibly as any athlete I’ve seen play.

That, and a home run I saw him hit at Metropolitan, or Met, Stadium in Norfolk, where the Tides played.

Like many, if not all, minor league stadiums, the outfield signs had advertisements on them. One of the billboards in right field advertised a hamburger chain and rising above the sign was a large painted baseball glove with a hole in the web. There was a promotion associated with the sign: any player who hit a home run through the hole in the glove would receive free hamburgers for the rest of the season.

At a game I attended Gosger hit a home run through the hole in the glove. I was sitting on the third base side and like everyone else watched in disbelief and then astonishment as the ball headed toward the sign, at the glove, and then through the hole and out of the stadium. I, and the rest of the crowd, erupted at the one-in-a-million moment. 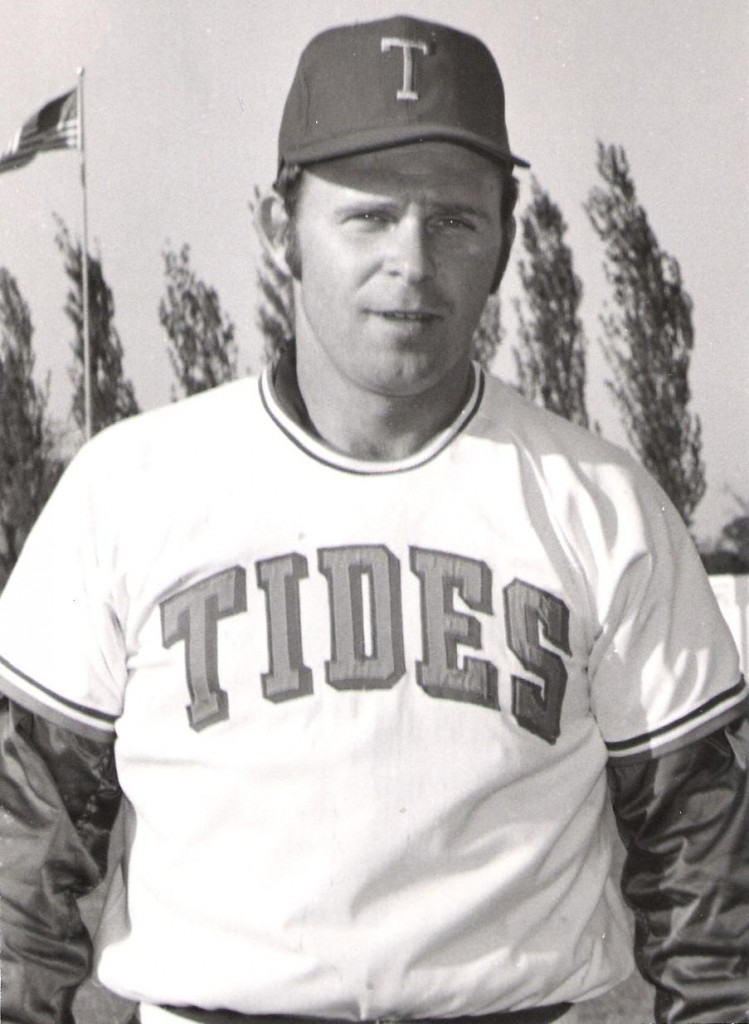 The home run must have occurred early in the game because every time Gosger came up afterward there was applause and murmuring about his feat. A man sitting near us shouted “hit another one, hamburger man,” or something like that, during Gosger’s subsequent at bats.

I thought about that home run and Gosger through the years. Not with any great frequency but occasionally, maybe during baseball season when I’d go to a Tides game, or if former Tides would be mentioned during a broadcast, or perhaps when I’d be talking baseball with friends.

But as the years went on and the memory of the home run became distant and hazy I began to question if it had even happened. Did Gosger really hit a home run through that hole in the glove? I don’t see how I could have made it up but maybe I did. It was such an odd thing to have happened but an even odder thing for me to have imagined.

It began to haunt me. Did it really happen? And, if so, did Gosger gorge on hamburgers the rest of the season?

Dave Rosenfield’s tenure as general manager of the Tides began in 1962 when they played in Portsmouth and the team was affiliated with the St. Louis Cardinals in the South Atlantic League. He retired in 2010 when the team was known as the Norfolk Tides, they played at Harbor Park in Norfolk, which opened in 1993, and were the Triple A affiliate of the Baltimore Orioles. 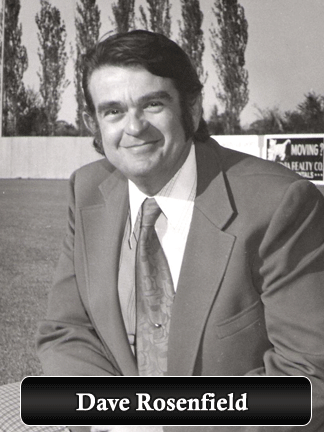 Dave Rosenfield was inducted into the 2008 Hampton Roads Sports Hall of Fame. (Photo  from the Hall of Fame Website.)

He was named King of Baseball in 2004, which is awarded by minor league baseball each year in recognition of longtime dedication and service to professional baseball. (By the way, the first winner, in 1951, was Clarence “Pants” Rowland.)

Rosenfield now serves as the team’s executive vice president and senior advisor. From 1969 until 2006, the Tides were the Triple A farm club of the Mets and their 38-year partnership was the second longest in Triple A, behind the Atlanta-Richmond affiliation, which began in 1966 and ended in 2008. 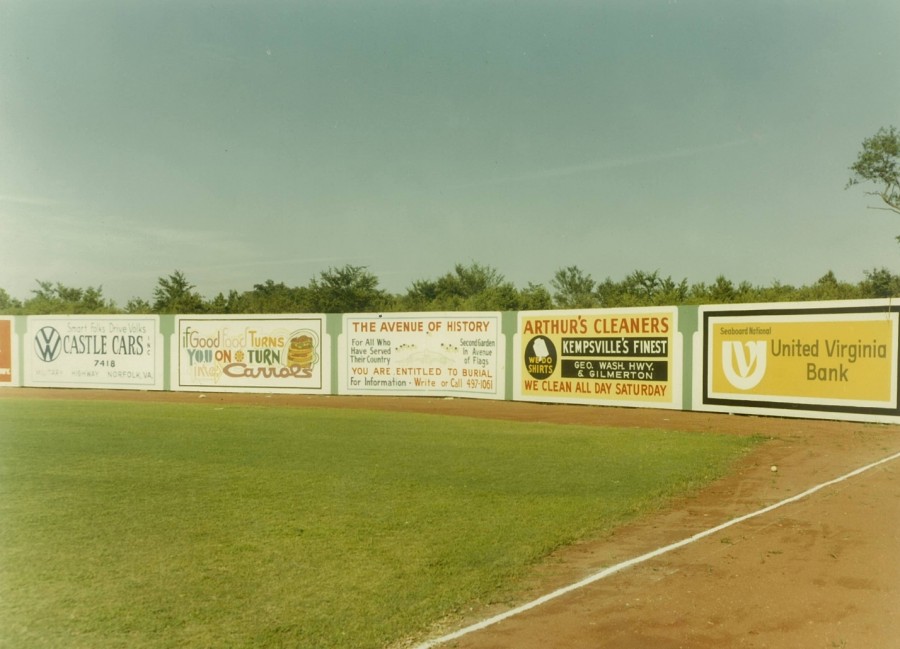 Rosenfield remembered the sign featuring the hamburger promotion, which he thought was sponsored by Burger King. “Burger King was a big, big sponsor for us,” he said. The billboard, as he recalled, had a ballplayer painted on it with his outstretched arm holding the glove with the hole in it above the top of the sign.

But what Rosenfield could not recall was Gosger’s hamburger-winning home run.

Gosger actually had two stints with the Tides. The first was in 1969. By that time, Gosger had been playing off-and-on in the major leagues since 1963.

A native of Port Huron, Mich., Gosger was a four-sport star in high school. In 1962, during his second year in junior college, he was drafted by the Boston Red Sox and was assigned to their Winston-Salem affiliate in the Carolina League. The next year Gosger rode the bench for the Red Sox. Due to baseball’s rules at the time, he had to be on the roster for the entire season because of the bonus he had signed.

Gosger was known as a hustler and an excellent defensive player and an average, at best, hitter. During his 10 years in the majors, he played in 705 games and batted 226. He had 25 stolen bases, 177 RBIs, and hit 30 home runs, so he wasn’t exactly a power bat.

His first major league home run, he said, came in 1965 during his second year with the Red Sox. He hit it off of Phil Ortega in Washington against the Senators. Another memorable home run, he said, was one he hit off of the Yankees’ Whitey Ford in his first at bat against him.

After his year with the Red Sox, he was sent to Reading, Pa. in the Eastern League, where he had a stellar year. He hit .274, had 22 stolen bases, and led the league in both triples, with 13, and outfield assists, with six. The following years he played for Boston, the Kansas City and Oakland Athletics, and in 1969, the Ball Four Seattle Pilots. 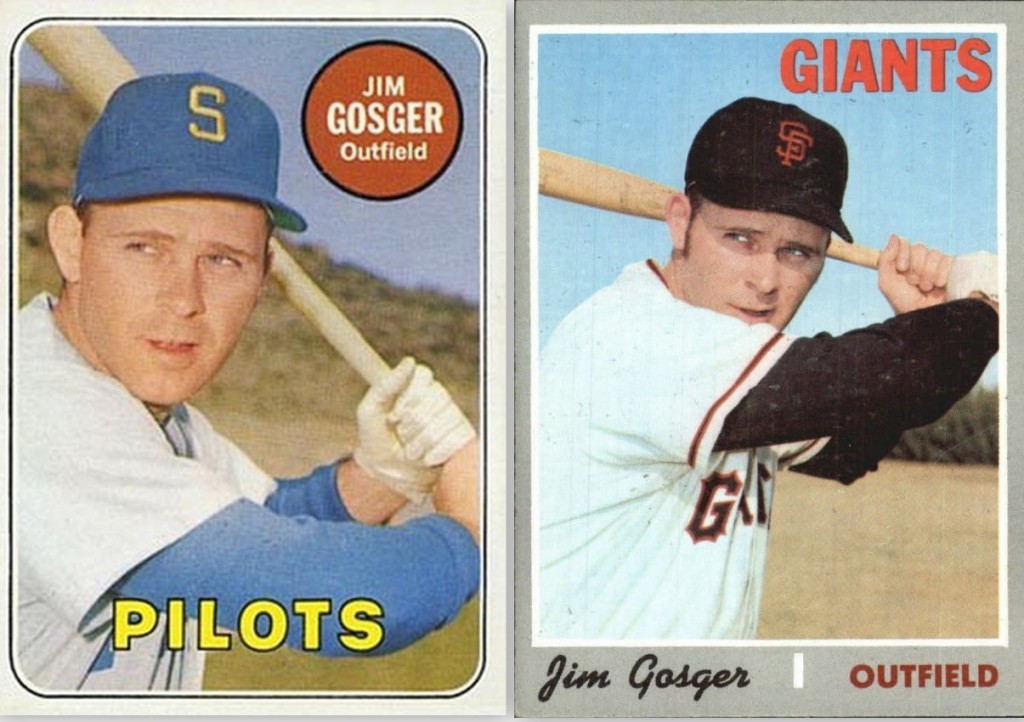 Batting .109 in mid-June with the Pilots, Gosger was sent down to Vancouver, and he was back in minor leagues for the first time in four years.

He told Bouton, “You know, I didn’t think I was that bad a ballplayer but they’re making a believer out of me.”

That’s when he came to Tidewater the first time, the player to be named later for Seattle’s earlier acquisition of Greg Goossen. At Tidewater, Gosger batted .341 with 10 home runs and 14 doubles in 58 games. He hit in 35 of his first 36 games with the Tides and was named the league’s player of the month by Topps. The Tides won the International League title.

“That was by far the best team I played on in Triple A,” Gosger said. “You had Amos Otis in centerfield, Roy Foster in left field and me in right. Mike Jorgensen at first. Jim Bibby and Jon Matlack pitching. We just had a great team.”

After the season, Gosger was promoted to the Mets. He didn’t play much with the Miracle Mets and wasn’t eligible to play in the postseason, but he celebrated with the team when it clinched the National League East division title.

The next stop for the journeyman was to the San Francisco Giants who had Willie Mays, Bobby Bonds, Ken Henderson, and Jim Ray Hart as outfielders. Playing time was going to be scarce, so Gosger was sent down to Phoenix in the Pacific Coast League. Eight games into the season, he was sold to the Montreal Expos who assigned him to Buffalo of the International League.

Gosger was hitting .327 in Buffalo with eight home runs in 30 games when he was recalled to Montreal in June. He played 91 games for the Expos, 50 of them in center field, while also playing left field and first base.

By the end of June during the 1971 season he was hitting.164 and was demoted to Winnipeg, where the Expos’ Buffalo affiliate had moved. After a month in the minors he finished the season in Montreal. His hitting did not improve—he ended at .157 in 102 at-bats. After the season he was traded to the Mets for four minor leaguers.

“I prevailed upon the Mets to get him back,” Rosenfield said. “We were doing a lot of trades with the Expos. We got Rusty Staub for Ken Singleton, Mike Jorgensen, and Tim Foli. He was a very good player and a very good guy on the team. Good clubhouse leadership.”

Gosger spent the entire 1972 season with Tidewater, appearing in 142 games, the most he had ever played for a team in a single season, but he only batted .244. He began the next season back in Tidewater, but was called up to New York early in May. He played two months with the Mets, hitting .239 with no home runs, before being sent back south to Tidewater.

Sure it was the minor leagues but Gosger enjoyed playing in Tidewater. “I lived almost on the beach. We’d sit on the beach all day and then play ball at night.”

It was during those 1972 through 1974 seasons when he must have hit the home run. If indeed it happened. 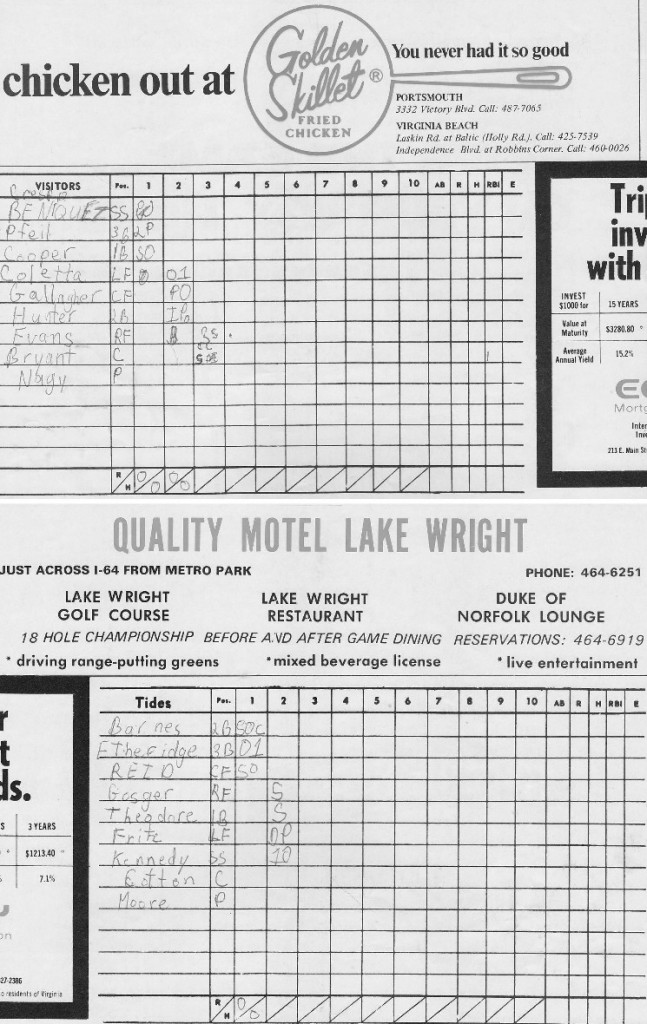 Tides vs. Pawtucket Red Sox scorecard that I abandoned after the top of the third inning. Could this have been the game that Gosger hit the home run through the glove on the billboard to win the hamburgers?

Would Gosger remember it? And, would I be able to track him down?

After retiring from baseball, Gosger moved back to his hometown of Port Huron and worked as a city recreation director in nearby Yale. He also was a high school and junior college football and basketball referee for three decades.

Gosger has a Facebook page where he affably and graciously connects with fans who share photos and memories of him from his playing days. So I sent him a Facebook message, introducing myself and asking if he would be amenable to answering a few questions for me.

“Jay send them along and I’d be happy to answer them,” he replied.

I wrote back: “This has been killing me for years. I could SWEAR, but maybe it’s my memory playing tricks on me, that one time a hamburger chain had a promotion and if a player hit a home run through a hole in a glove in a billboard they would get free hamburgers for the season or something like that. And, as I remember, you hit a ball through the glove. Does that sound familiar or is my memory shot. Was that you?”

“Yes it was Jay. Didn’t go get the hamburgers.”

My mystery was solved. My memory had not betrayed me.

Funnily enough, it wasn’t the first time Gosger won food at a minor league game. He recalled cracking a home run off of Mel Stottlemyre when they both played in the Carolina League. “There was a ham you could win if you hit the ball over the scoreboard in left field.” Gosger said after he hit the ball over the fence, Stottlemyre yelled at him, “I’m going to get half of that ham.”

“I always hit him well,” Gosger said. “I got him the big leagues, too.”

When I spoke with Gosger, he said that the hamburgers had been delivered in cartons the next day. If the answer differs from the one he gave me on Facebook, if his memory is a little hazy, who cares?

The important things are he hit the home run, I remembered it correctly, and that my 11-year-old self would be deliriously happy and incredulous if he knew that one day he’d be having conversations with a former professional ballplayer delighted to share stories about his time in the major leagues.

A tip of the baseball cap to Mark Armour, mark-armour.net, for his biography of Jim Gosger at sabr.org/author/mark-armour, the source of the information about Gosger’s baseball career.

← And Speaking of Wreckless Eric …
FOURTEEN FOR THE ROAD →