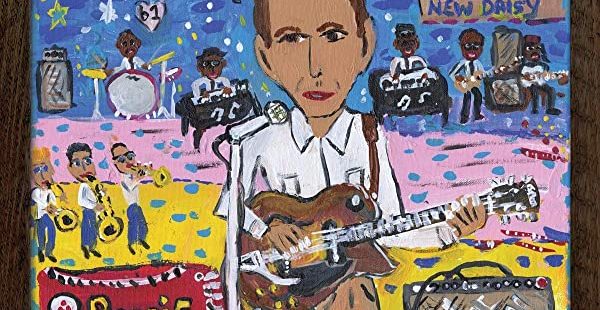 I like Alex Chilton okay. As a solo act, and with Big Star, he’s not a top-tier artist for me, not that I’m that familiar with a lot of his music. I like the Box Tops more than either, or at least “The Letter” and “Cry Like A Baby.” But I liked Chilton well enough to see him at the Khyber Pass in Philadelphia in 1999 with my friend Mike. I was not going to miss an opportunity to see a legend in a small club.

Otis Clay is a different story. He is top-tier for me and his album, Soul Man, Live in Japan, is one of my all-time favorite albums.

When I learned that there was a live album by Chilton, Boogie Shoes: Live On Beale Street, with the Hi Rhythm Section, who backed Clay (and so many other greats) on the Soul Man album, I had to have it.

The performance is also from 1999 and is from a charity gig on behalf of Memphis musician Fred Ford, who Chilton had played with.

The album has a lot of fun covers of classic songs like the Supremes “Where Did Our Love Go” and Chuck Berry’s “Maybelline.” Well, mostly classic, depending on your point of view. He does indeed cover KC and the Sunshine Band’s “Boogie Shoes.”

Coincidentally, or not, my favorite cut is “Precious, Precious,” written by Jackie Moore and Dave Crawford, which is on the Soul Man album.

This is a fun album whether or not you’re a fan of Chilton.

Boogie Shoes: Live on Beale Street can be purchased at Omnivore Recordings.

Don Powell’s Occasional Flames have their second album out, Just My Cup of Tea, and I like it as much as I liked their first one, Taping The Hiss.

Powell is the former drummer in Slade and the Occasional Flames are Paul Cookson and Les Glover and these guys just speak to me. They have witty songs about getting older filled with references about the musical heroes who have provided my life’s–and probably your life’s–soundtrack.

The album begins with the crunchy power chords of the title track “Just My Cup of Tea” with the lyrics, “Old men, new teeth, not everyone can be like Mick and Keith.”

… Stars we could relate to
Stars without the fuss
Not serious, mysterious, but stars that could be us.
Songs that we could sing
Played on smash and grab guitars
Extra-ordinary men but ordinary stars
More than jesters
And technicolor clowns
Who ruled the charts
Our Kings without a crown
Our Beatles and our Stones
Our Pistols, our Ramones

If you can remember when rock was young, which means you aren’t, you’ll probably like this album.

You can purchase Just My Cup of Tea at the band’s website, occasional-flames.co.uk/

The War and Treaty: Hearts Town

The War and Treaty is one of those bands I had heard of and was interested in but, as I say, you can’t listen to it all. When I had the opportunity to get a copy of their not-so-new but most recent album, Hearts Town, I snapped it up.

The album’s first song, “Yearning,” begins with a blast of guitar—I don’t know if it’s feedback or what—but it’s a mighty sound and tells you to pay attention, that there’s some serious music that’s going to be made here

The guitar is terrific throughout, from the rhythm guitar powering “Yearning” along with a solo, to the funky guitar on “Five More Minutes” with another nice solo, and with horns and organ giving it a classic soul feel.

But the stars of the show are the husband and wife who are The War and Treaty, Michael Trotter Jr. and Tanya Blount-Trotter, and their passionate singing.

I’m particularly fond of the three-pack that begins with the love song “Five More Minutes,” continues with the title track, “Hearts Town,” which leads into the acoustic, churchy “Jubilee.”

Hearts Town can be purchased at The War and Treaty website, thewarandtreaty.com.